A Musing – God, the Door to the Holy Place

Remembering that God is one, and Jesus Christ is Lord as Yahweh in the Old Testament is Lord of heaven and earth,[1] the readings in Deuteronomy can be a bit distressing because God seems so harsh and unyielding. We can conclude that He should seem so, but it depends on your point of view as to whether or not that’s problematic.

For me, it’s helpful to picture God Himself standing in the doorway to the Tabernacle where we meet with Him at the Mercy Seat in the Holy of Holies (cf. Hebrews 8:4-6).

This analogy may be close to what Jesus said about Himself. He said said He was The Door of the Sheep in John 10:1-18 and echoes that in John 14:6 where He self-identifies as The Way. If we imagine God standing in the door of the Tabernacle, it’s also good to try to visualize what’s on either side of The Door. On the inside are gathered all those in a covenant of holy love with Him. On the outside is a world of evil rushing to overthrow God and His Tabernacle. In the New Testament, that is seen as a great war being waged by Satan against Christ and His Church.[2] 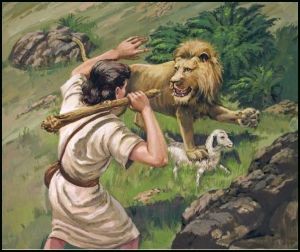 As God faces outward from the Tabernacle (i.e., sheep fold) His face is fierce and unyielding. He will defend at all costs those gathered in – even at the cost of His own life. Those He’s gathered inside are absolutely safe from the death and destruction posed by the onslaught of wickedness – as long as they stay inside the Tabernacle. If they venture out, they are exposed to the enemy and quickly enslaved in the warfare against God. If those who’ve gone over to the enemy rush with him in an attack on God’s holiness, what is the face of God they will see? It is an awful, hard countenance full of holy fire.

As God faithfully checks the enemy at the door, He turns around toward those in His care and His face softens with joy and peace. He laughs as He gathers up His children and comforts them about the darkness they’ve glimpsed coming against them. He assures them that NONE can snatch them out of His care,[4] and NOTHING can separate them from His love.[5] They are at peace, while those pitted against God shrink back in fear and anger, pouting and complaining all the way back into the darkness that enslaves them.

Occasionally God will mount a rescue operation, going out of the Tabernacle (sheep fold) to find the lost one and bring him or her home.  Upon returning to the holy Tabernacle in humble repentance, the one coming home will see that God’s face has softened with forgiveness, delight and acceptance. The lost cannot return any other way than through The Door Himself,[3]  but once they have, all within join a  great celebration for the one safely returned.[6]

Also, when He deems best, God mounts a counter-offensive against the wickedness. This is what we see in Numbers 31, in the rules of war in Deuteronomy, and again in the conquest of Canaan. In Deuteronomy 9:3-5 God identifies clearly that those accounts record an offensive against wickedness. When God does move to do away with evil, whoever engages against Him cannot stand. They are utterly destroyed under what is called The Ban.[7] 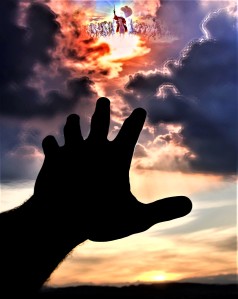 In some future day, God will mount that counter-offensive from out of His holy temple against ALL wickedness, both seen and unseen, both what is obvious and that which is woven in secret into our very natures. That day is called by the scriptures the Day of the Lord. Those within the covenant are waiting patiently for that day but groaning with all creation in anticipation of its coming.[8]

In the Lord I take refuge;
how can you say to my soul,
“Flee like a bird to your mountain,
2 for behold, the wicked bend the bow;
they have fitted their arrow to the string
to shoot in the dark at the upright in heart;
3 if the foundations are destroyed,
what can the righteous do?”

4 The Lord is in his holy temple;
the Lord’s throne is in heaven;
his eyes see, his eyelids test the children of man.
5 The Lord tests the righteous,
but his soul hates the wicked and the one who loves violence.
6 Let him rain coals on the wicked;
fire and sulfur and a scorching wind shall be the portion of their cup.
7 For the Lord is righteous;
he loves righteous deeds;
the upright shall behold his face.

[7] See discussion on The Ban by Gary DeLashmutt