How God taught me that He is the Healer

One of the names for God is Jehovah-rapha, God the Healer. We are studying names God calls Himself in a Bible Study I am leading on Thursday morning and the study based on this name has brought back many memories and so many thoughts that I had to sit down and share some of them.

I have always believed God could heal. How can you say you believe the Bible and not come to that conclusion? That book is full of miracles. The problem is that we no longer live in Bible times and although God can heal, growing up I didn’t see much evidence of more than the natural, built-into-the-body healing happening. Knowing God could and seeing it happen are two very different things.

My first personal experience with a God who heals came as God worked in my life and taught me that He could heal my heart and forgive my sin. The problem is, it took a long time to realize that that was the greatest healing He could do in my life. And He didn’t stop there. In 1973, when I was pregnant with Jennifer, my back began to ache so badly that I could only stand or sit with my fists jammed into the base of my back to keep the terrible pain away.

One night we were at the home of some friends. Edmond, the husband, is someone who feels God has given him the gift of healing. During the evening he noticed my discomfort and finally told me he wanted to pray that God would heal my back. I brushed him off and even his wife commented that the pain was there because I was pregnant. Edmond said, “God said women would have pain in childbirth. He didn’t say anything about the nine months before they gave birth.” I reluctantly sat on a chair in the middle of the room and Edmond laid his hands on my head and prayed that God would heal my back and give me a safe delivery. I experienced heat rushing up and down my back and the pain left.

Now people say if you have faith God will heal you and if you don’t, He won’t. I had no faith that I would be healed. In fact, over the next few weeks I would twist my back around and say, “Well, it doesn’t hurt yet!” fully expecting the pain to return. It never did.

When Jennifer was eleven months old we were moving from Omaha to Washington State. We sold our car and bought a farm truck and piled it high with our stuff. The plan was to leave late at night, drive while it was dark and cool and sleep in the heat of the day. Before we left Jennifer came down with a high fever and was really sick. We were staying with Edmond and Karen the final night before we left and once again, Edmond felt led to pray, this time for our daughter. As he prayed, her fever left and she began to sleep comfortably. We were able to leave on schedule.

Many things happened on that trip with our truck and God did a number of miracles with it, but He also taught me a great lesson about healing. One morning when we got to the hotel to sleep during the heat of the day, I got really sick. I ran a high fever and was throwing up and experiencing diarrhea. David and Jennifer were asleep, but I was miserable. David’s parents had sent us a booklet titled “God Wants You Well” and I had read it just before we left. As I lay on the bed in the motel I asked God to heal me. I gave Him a list of reasons why He should answer my prayer. The last reason was that I would tell people of His power and He would get the honor and glory for healing me. I can clearly remember the voice of God speaking to me. He said, “Alright, you are healed. Wake up David and tell him.” Instead, I ran into the bathroom and threw up again. Obviously, I wasn’t really healed. Again, God told me to wake up David and tell him God had healed me, and again I resisted because I was still very ill. Then God asked me something I will never forget. He said, “Who do you believe, Me or your symptoms?”

I told God I believed Him and that I would tell David as soon as he woke up. David immediately rolled over, opened his eyes and looked at me. “God just healed me.” I mumbled. My husband rolled back over and went right back to sleep. I was relieved because nothing had changed. The next four hours were spent in and out of the bathroom. When David finally woke up, I was hoping he’d forget what I told him for by now I knew it wasn’t true. I was still sick. However, the first thing he said was, “Did you try to tell me something before?” Taking a deep breath I once again said, “God healed me.”

David’s response was, “Great. Let’s get dressed and go get something to eat.” I will never forget the restaurant we went to, for I was so hungry I ordered their fried chicken dinner with two extra pieces of meat. I ate the whole thing. By the time we left the restaurant I was completely well and even the cold I’d had was gone!

One of our best lessons in healing was in 1979 when we were living near Chicago. David stayed in bed for three days because we thought he had the flu. We were watching a television program where they were praying for God to heal the sick and I laid my hands on David and prayed for his healing along with the man on television. David stopped me and said, “Please stop praying. The longer you pray, the stronger the pain gets.” I helped him get dressed and down the stairs. We went to the nearest Urgent Care. There they immediately let us know something was terribly wrong and put an IV in David and told me to take him to the hospital. I couldn’t get him and an IV in my tiny Chevette so they ordered an ambulance. As I followed them to the hospital, God flooded me with so much joy. I could actually feel God’s arms around my shoulders and I lifted one hand as I sang praise songs all the way to the hospital.

When we got to the hospital, the doctor flipped the x-rays on the light, took one look at them, and said to me, “I hope we’re not too late!” as they rushed David off to surgery. His appendix had burst three days before and he was full of gangrene that was attacking his organs. When the doctor returned after the four hour surgery, he told me that David had only two hours to live if we hadn’t gotten him to the doctor.

God had healed Jennifer and me outright. He healed me when I obeyed Him and told David. Now He showed us He could cause really bad pain to drive us to the doctor and heal us that way. After eleven days in the hospital, the doctor told David that he should take his miracle cure and go home. They had expected him to be there three weeks, but God caused the healing to happen much faster.

When we moved into our Nehalem house in 1998 I tore my rotator cuff painting the family room. For eight months my arm would spasm when I tried to reach behind me, lift my arm or just move the wrong way. I couldn’t even get anything out of the cupboards with my right arm. One Saturday night we had a praise and worship service at church. Halfway through the song “Let It Rise” I realized my hand was raised it praise. It was straight up over my head. I nudged David and said, “Look at my arm! God has just healed me!” And He had. No more pain or spasms.

In 2007 when God healed my lungs after a year and a half of complete weakness, He first said, “Julia, you have not thanked me for this weakness.” I was dumbfounded for I could not think of anything that I should be grateful for. I had to quit my job, stop all my activities at church and just sit for a year and a half. God continued. “I have cleared your schedule, no one expects anything of you, you no longer have any responsibilities. I have given you a chance to start over with your time and you haven’t told Me thank you.” I said “Thank you.”

The next night God woke me again and told me He would heal me, but it would be a long obedience in the same direction. I didn’t know what that meant, but the next day it was obvious, God had healed me. My energy was back and for the next seven years the weakness did not return.

Now I am ill again. I have had another torn shoulder for several years that severely hinders motion in my arm and causes a lot of pain. God has not healed it despite my praising Him. My lungs are dying and now the doctors tell me I am terminal. Not only could my lungs quit, it is putting stress on my heart as well. We have prayed for healing, but God has not answered. He has, however, provided very expensive medicine at no cost to me and He has stopped the deterioration of my lungs for the past year. I am getting weaker, but God has given us joy in the journey. 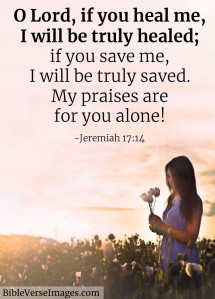 Will He heal me? I don’t know but I know He will take me to heaven to be with Him forever and there I will be completely well forever.

David said something last night that really struck me. Any healing here of our bodies is only temporary for we will physically die. Any healing of our souls is permanent for our souls live on with God forever. How I thank God for that permanent healing in me!