Dare To Be That Daniel

Who would not want to be like the biblical hero Daniel?

Most of us dream of waking up some day and being like the golden boy of ancient times. Daniel was physically handsome and strong, emotionally stable, socially poised, and mentally quick. He was spiritually gifted and a persuasive speaker. He was able to manage people, affairs of state, his home life, and still remain regular and passionate in his devotional life before the Lord. Daniel rose to the top in the Babylonian Empire under Nebuchadnezzar and then stayed near the top under succeeding rulers. He seems to have been a golden boy who had everything going for him in terms of his gifting, position, and prestige.

However, did any of the things mentioned above get him through the tough times? Ezekiel mentions him along with Noah and Job as one who remained righteous while going through testing (Ezekiel 14:12-23). How tough could it be for this golden boy of ancient times?

To begin with, we should not forget that Daniel had been exiled from his homeland and family in Judah as a teenager. He was taken by force to serve in the emperor’s court. From the beginning of his Babylonian life, he faced constant temptation and pressure to worship the idols and culture of Babylon. In government service, he faced a lifetime of opposition and hatred from fellow government officials and national religious leaders. He constantly had to adapt his language and methods through the turmoil and uncertainty that comes with changes in administration of empires. And yes, he was thrown into a den of lions! So much for a golden existence for our golden boy! And so much for us wanting to be like him. 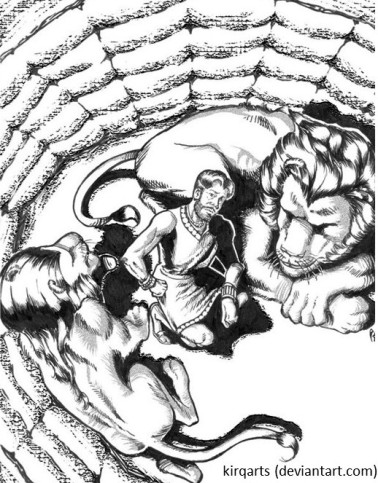 The amazing thing is that it was not Daniel’s good looks, strong body, his quick mind, or his prominence in government that rescued him in, and out of the den of lions. It was God Himself delighting to walk with him, uniting His power and wisdom to the strength of Daniel’s moral convictions. The New Testament book of Hebrews mentions Daniel among people of living, overcoming faith. His life was built upon a solid foundation of trust in the one true and living God walking with him.

Daniel did not deserve or make his own way. God is the one who gives or withholds favor to us in the physical, mental, and social gifts he bestows. And, no matter what, he is to be praised and worshipped. Daniel was not a preacher or a priest, but he was willing to say to his godless contemporaries, “When it comes to matters of the heart, and God’s place in my heart, I will not be moved. I cannot go where you want me to go.”

On the outside, Daniel was a handsome, powerful, favored Babylonian administrator. On the inside, he was a humble servant of Yahweh that used the gifts God had given him to step bravely into the opportunities open before him. Let us dare to be that Daniel!

A classic hymn I enjoyed singing as a boy…

Standing by a purpose true, / Heeding God’s command, / Honor them, the faithful few! / All hail to Daniel’s band!

Refrain: Dare to be a Daniel, / Dare to stand alone! / Dare to have a purpose firm! / Dare to make it known.

Many mighty men are lost, / Daring not to stand, / Who for God had been a host / By joining Daniel’s band.

Many giants, great and tall, / Stalking through the land, / Headlong to the earth would fall, / If met by Daniel’s band.

Hold the Gospel banner high! / On to vict’ry grand! / Satan and his hosts defy, / And shout for Daniel’s band.

During the night the mystery was revealed to Daniel in a vision. Then Daniel praised the God of heaven 20 and said:

“Praise be to the name of God for ever and ever;
wisdom and power are his.
21 He changes times and seasons;
he deposes kings and raises up others.
He gives wisdom to the wise
and knowledge to the discerning.
22 He reveals deep and hidden things;
he knows what lies in darkness,
and light dwells with him.
23 I thank and praise you, God of my ancestors:
You have given me wisdom and power,
you have made known to me what we asked of you,
you have made known to us the dream of the king.”