Four years ago, our nephew Tyrone, his wife Pauline and their four children came to Oregon to spend part of his sabbatical introducing their children to a place they learned to love during the two-and-a-half years he worked with David as our assistant pastor.

We wanted everything to be perfect and restful for their visit, so we worked to get our RV ready for them to use at the coast so they could spend time showing their children why Oregon is such a wonderful place. That’s when our problems started. The hot water heater went out so it had to be fixed. The place we’d reserved near the town of Bandon-By-The-Sea ended up being too small for our thirty-three foot RV.

Since our fixes didn’t work, we just turned off the water heater completely. We borrowed a truck and moved the RV into a spot at Bastendorf State Park, about twenty miles north of our original spot, next to a site where Michael and Jeannie Stubblefield, some mutual friends, were camped. Once the huge thing was in place, a water leak sprouted and the carpet became soaked. Michael got the leak stopped by simply turning off all water to the RV. We ended up feeling like the whole event was a major disaster since nothing had gone according to plan nor had anything been easy. 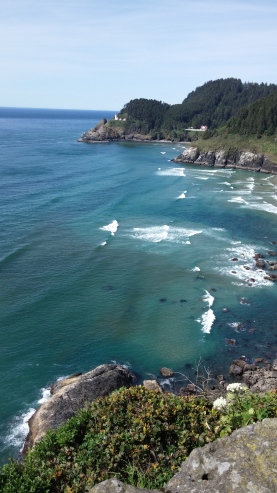 , nothing happens by accident or without a higher reason. After a frustrating morning of fighting the water leak, Michael and Ty decided to take a break and walk on Bastendorf Beach. While walking, they noticed some heads bobbing in the water a long way out. As they walked, they realized it was a man pushing a boogie board that held two small children and they seemed to be in trouble. Michael grabbed his phone and called 9-1-1. The operator kept asking him questions and he finally said, “Listen, I have to run and get wet,” and he threw the phone to Ty and headed into the water. A woman on the beach also heard the cries for help and also headed into the ocean. She managed to grab the boogie board and pull the two young boys to safety. Michael reached the man just as he collapsed. He asked “Are Danny and David alright?” and when he heard they were, he passed out. He threw up all over Michael as he held him up and dragged him out of the water. The man was still unconscious when the ambulance arrived.

It appears that the man—known only as Paul—was jumping waves with his sons when he slipped off the edge of a drop-off on the ocean bottom and could no longer touch the ground. He had been paddling for twenty-five minutes, trying to keep his boys afloat. By the time the woman rescued the boys, he was too exhausted to get out of the water alone. If Michael hadn’t been there, he would have drowned.

As we put the events together, we can see that it wasn’t an accident that the reserved spot by Bandon fell through, nor was it just by chance that the water leak caused such frustration. It was all orchestrated so Ty and Michael would be walking down Bastendorf Beach just at that precise moment to save Paul’s life.
As I read this story on my Facebook memories section today, I was reminded that’s the way it is with events that often frustrate us. We see them as intrusions, plan interrupters, or just plain sources of pain. If we look around, however, often they are sent as opportunities to grow, to help or to teach.

Just as that event gave Ty and Michael and their families a firsthand story of how problems with the RV caused a life to be saved, it can encouraged us to realize that the trying events in our lives serve a purpose and are part of a greater plan. We need to stop complaining, open our eyes and see the opportunities that come our way.

Who knows what lives may be changed or what stories may happen that will affect generations to come because things don’t go as we plan them. Only God knows.